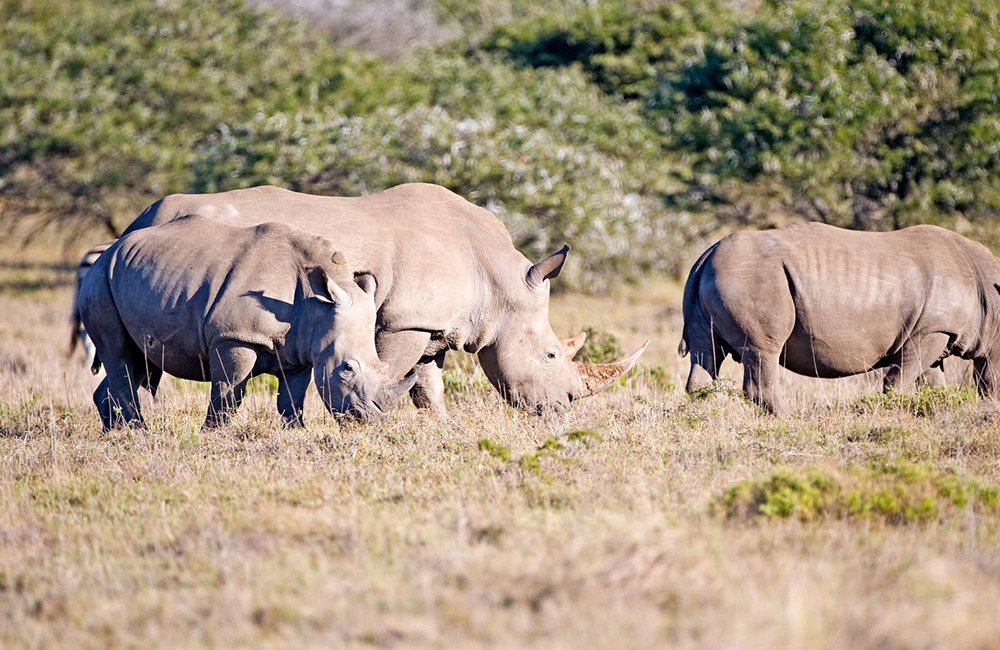 Spotting a rhino on your Big 5 African safari is an awe-inspiring experience. Despite their prehistoric appearance, rhinos are reserved and shy animals. Over half the world’s remaining rhino live on the plains of the Greater Kruger National Park across thousands of hectares in the main and adjacent unfenced private reserves.

Sadly, some of the African rhino subspecies are already extinct and the black rhino subspecies are now most critically endangered with less than 2000 left in the wild globally. These amazing gentle giants are under great threat from poachers and need as much help as they can get to stay a part of Africa’s extraordinary wildlife display.

White rhinos are the species you are most likely to spot on your rhino safari in South Africa, plodding gently, grazing in the savannah. Your game rangers will keep at a safe distance as these massive mammals don’t like being disturbed. At the sight of these magnificent creatures one can’t help but be silently in awe of their powerful presence, yet peaceful way of being.

Should you ever spot both a black and a white rhino, you’ll notice that the black rhino is the smaller of the two species. Despite their different names, they both have grey skin with hair on their ears, tail tips, and eyelashes only.  The smaller black rhinos feed in denser savannah during cool early mornings. Besides the fact that they are critically endangered, this makes them even harder to spot as once the heat of the sun beats down, they retreat to their private hideouts. Rhinos love to wallow in the mud as their thick skins are sensitive to sunburn.

They are browsers, meaning they eat from higher shrubs and bushes. Their hooked lip, as opposed to flat-based lips, are therefore ideal for their eating habits. As with white rhino, they need water for drinking at least every 2 to 4 days.

Between 1970 and 1992 the rhino population tragically declined by a staggering 96% due to illegal poaching. Poaching increased as a result of the high demand for rhino horn in The Middle East and Asia showcasing as a symbol of wealth and used for medicinal purposes.

Only 2410 black rhinos were left in 1995. Although steady conservation efforts have helped to make progress in recovering the dire situation, much more work is needed to ensure a future for these vulnerable giants. Poachers remain the biggest threat to their success of survival.

Black rhinos are creatures of solitude with a natural lifespan in the wild of 30 – 35 years. They have poor eyesight and cannot easily detect an observer standing more than 30 metres away. They do however have an excellent sense of hearing and smell and will charge at perceived threats, able to run up to 55 km/h and change direction very quickly.

Males, with their thicker horns, tend to live in solitude with a territorial range of 3.9 – 4.7km while females roam with their calves in a territory of 5.8 – 7.7km. When courting, males will stay with females for up to 30 days.

Scent-marking by urine spraying of a 3-4 metre range is an important means of communication when males mark their territory, and when females signify that they are ready for mating. Rhinos also leave a distinctive smell by means of rubbing their head against a rock or tree. A scent gland located on the skin of their head is used to mark territory in this way.

Weighing between 35 – 45 kg at birth, black rhinos grow to between 900 and 1350 kg in adulthood. Rhinos give birth for the first time at the age of 6.5 – 7 years, with a gestation period of 15 – 17 months. Within an hour of being born calves will stand up and attempt to suckle. They start grazing at two months, and weaning occurs at around one year. Calves will stay with their mother for 2-4 years before being rejected and the female is ready to calve again.

The white rhino has a large head hanging down to the ground for feeding on grasses with a flat upper lip adapted for grazing. Its 2 massive horns at the tip of its nose are used as weapons against predators and as a threat of dominance among rhinos. White rhinos can run up to 40 km/h for short distances.

As with black rhinos, white rhinos are not very social, with males being very territorial. Small groups of rhinos are sadly no longer seen due to poaching. A territory of 1 – 3km² is held by a mature male, with a maximum of three other resident bulls which the territory ‘owner’ ignores as long as they are submissive. Territorial bulls may, however, be aggressive towards foreign bulls. White rhinos mark their territory with scent-posted dung heaps.

Female territories are much larger at 6-20 km² and overlapping several males’ territories. Being a lot more social, females have a strong bond with their calves who stay close by for the first 3 – 4 years, heading its mother’s calls and behaviour. When it is time for the mother to calve again, the initial calf seeks another companion, generally of similar age and gender.

Rhinos wallow in the mud or roll in dry dust as an effective means of repelling insects. Red and yellow-billed ox-pecker birds seen with rhinos remove ticks and parasites from their thick skin and alert them of danger.

Why not join an initiative to save these incredible creatures on your next rhino safari in South Africa? Ask one of our experts regarding conservation projects and remember by simply visiting and supporting South Africa’s private Big 5 game reserves, you’re already contributing to their conservation initiatives in protecting Africa’s precious Big 5. 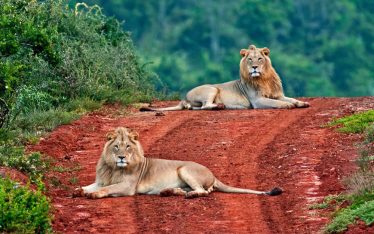 The Big 5 Safari- African Lion
It has been said that ‘There is no greater experience in Africa than to hear the roar of the lion,’ and we couldn’t agree more. A lion safari in Africa...
3 Likes 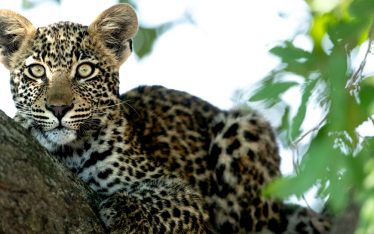 Big 5 African Safari – Leopard
Wildlife enthusiasts who embark on a Big 5 safari in South Africa are no doubt enthralled at every rare encounter of a magnificent leopard, whether resting in a tree, out...
4 Likes 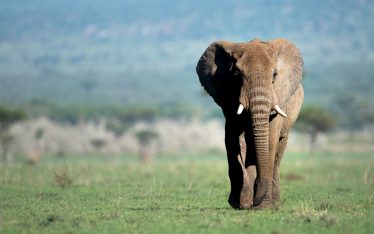 Big 5 African Safari – African Elephant
Proudly known as the Big 5, Africa’s most majestic safari sightings include the African Elephant, Rhinoceros, Lion, Leopard, and the Cape Buffalo. Origionally they were named as such due to...
4 Likes