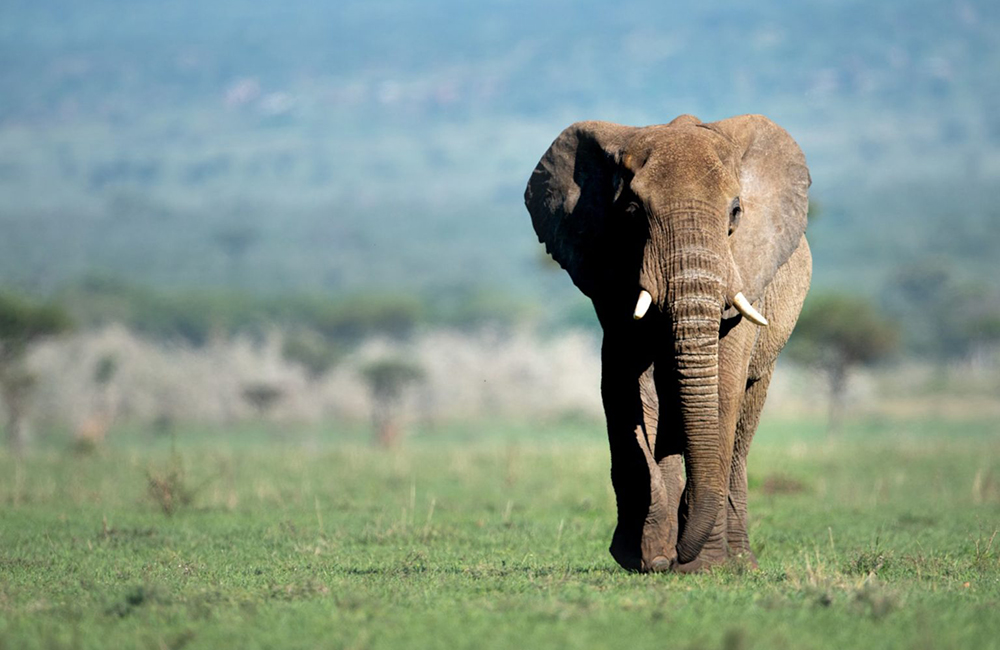 Proudly known as the Big 5, Africa’s most majestic safari sightings include the African Elephant, Rhinoceros, Lion, Leopard, and the Cape Buffalo. Origionally they were named as such due to being known as the most difficult animals to hunt on foot, as well as some of the most dangerous animals in the African bush. These animals are now, however, also sadly among the most poached wild beings in Africa.

The African elephant is not only the largest of the Big 5 but also the largest land animal on earth. Although some African elephant populations remain endangered today, the species was moved from an Endangered Conservation Status in 1996 to Vulnerable in 2004. These friendly giants with powerful tusks are a popular target for poachers in the illegal ivory trade, making them susceptible and their protection vital. In unprotected natural areas in Africa, elephants have also been the victims of human conflict, having to travel far to seek water and food due to habitat loss affecting their living conditions.

When seeing elephants on your Big 5 African safari you will learn about their behaviour and what truly intelligent animals they are, able to show emotion and remember information. Elephants are deeply family orientated, especially the females taking their responsibility of herding and protecting their young rather seriously. The matriarch, which is the oldest female, leads the heard and teach younger elephants how to act with etiquette. When meeting each other they greet by extending their trunk in greeting.

These highly social creatures have a beautiful caring nature. As humans do, elephants mourn and respond to the death of a herd member with sorrow. They sometimes ‘bury’ their deceased herd member and stay at the grave for a few days.

African elephants are wild animals and not easily domesticated. Adult males especially tend to roam on their own. The females have the longest gestation period of all land mammals. At around 22 months a female elephant will give birth standing up as herd members form a protective circle around her. Calves weigh 100kg at birth, gaining around 1kg daily until their first birthday. Fully grown an elephant can weigh between 2.5 and 7 tons.

Born almost blind, some baby elephants suck their trunk for comfort just like human babies suck their thumbs. At 13 to 20 years old, females are mature enough to have their own young and usually give birth to one calf every three to four years. Due to their weight, social alliance, and large size, elephants are rarely targeted as prey by other wild animals.

Young elephants, however, are sometimes the target of lion and hyena if they stray far enough from the group to become vulnerable prey without the protection of the large herd females.

Unlike most animals, elephants can recognize themselves. Their long trunks are handy for smelling, breathing, drinking, grabbing things, and trumpeting. Considering they are great swimmers, their trunks serve them well as a snorkel.

While splashing in the water elephants enjoy a shower by sucking water into their trunks and splashing it over themselves. Further completing their beauty regime, they take mud baths to protect themselves from sunburn, and to clean their skin of ticks and bugs. Their large ears radiate heat, keeping them cool in the heat of African summers.

These giants are surprisingly herbivores, eating up to 136kg of roots, grass, fruit, and bark daily to sustain their massive bodies. Their flat teeth are specifically so to assist in the breaking down of the plant matter they eat. The finger-like extensions on the end of their trunks are used to grab items and they are able to pick something as small as a grain of rice. These incredible mammals use their tusks to dig, strip bark from trees, and for protection. In the same way humans tend to be left-handed or right-handed, elephants also have a preferred dominant tusk.

Giants need good shoes, and so elephants are kitted with sensitive pads under their feet acting as shock absorbers and allowing them to walk around fairly quietly.

Join us on a magical journey at Gorah Elephant Camp situated in the Greater Addo Elephant Park. Although you will likely spot elephant at most Big 5 Private Game Reserves in South Africa, this area is known to be home to the densest African elephant population in the world, ensuring some spectacular sightings of Africa’s great giant. Gorah Elephant Camp is an exclusive 5000-hectare private game reserve an hour’s drive from the seaside city of Port Elizabeth in South Africa’s Eastern Cape province. Other attractive features of the reserve is its malaria-free location and easy access from highways along the popular and gloriously beautiful Garden Route.

Gorah Private Game Reserve hosts two game drives daily for its guests, led by skilled and masterful rangers and trackers. The reserve is home to all of the Big 5, as well as zebra, giraffe, warthog, and kudu. This is the perfect place to get amazing elephant and wildlife snapshots to brag about back home.

Besides marvelling at the magnificent elephant colony, guests at Gorah Elephant Camp in the Eastern Cape can also enjoy mountain biking, guided bushwalks, and community visits.  Book your elephant encounters with our expert safari team who will guide you to the best location for an unforgettable adventure in Africa.